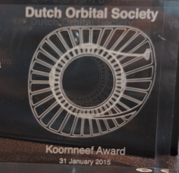 The LEO KOORNNEEF AWARDis given to an individual with an outstanding reputation in the field of orbital. lacrimal or eyelid surgery during the biennial meeting of the Dutch Orbital Society.

LEO KOORNNEEF (1945-2001) was one of the most influential Dutch orbitologists, who got world fame with his description of the musculofibrous network in the orbit (Spatial aspects of orbital musculo-fibrous tissue in man : a new anatomical and histological approach, 1977). It was at his house in the summer of 1981 at Zuiderwoude, a little village north of Amsterdam, that Bernard, Bleeker, Bonavolonta, Busse, Collin, Guthoff, Hatt, Hedin, Hübner, Koornneef, Lemagne, Liarikos, Morax, Murube del Castillo, Rougier, Steinkogler, Welham and Wright decided to set up the European Society of Ophthalmic, Plastic and Reconstructive Surgery (ESOPRS). Leo was fellow at Moorfields Eye Hospital with John Wright, Dick Welham and Richard Collin. Returning from Paul Tessier in Paris, he started coronal approaches for several orbital conditions including rehabilitative decompression for Graves’ orbitopathy. He also introduced brachytherapy for orbital malignancies.

Leo mentored many fellows, who in turn got influential positions (Mr. T. Tyers, Prof. Ilse Mombaerts, Prof. Hintschich and many others).

The LEO KOORNNEEF AWARD is a design by Willem van den Bosch and is sponsered by Rockmed.